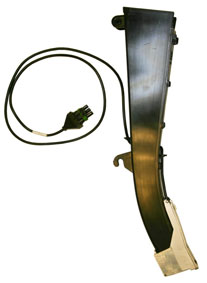 For measuring population, seed spacing, skips and doubles, you depend on the accuracy of your seed sensors. But optical sensors have four big problems:

Because optical sensors use light beams, they are susceptible to all the things that can falsely break that beam. That’s why dust is such a problem. Dust that blows up the seed tube looks like seed. So the optical sensor routinely overcounts seeds, which undercuts your population. Of course there are times when you can tell dust is the issue – when you're planting with the wind and your population spikes ten or twenty thousand seeds. But more harmful impact is the day-in day-out over reporting of seeds because of dust.

And then there is the problem of dust coating the sensor eyes and failing all together.

Optical sensors must be mounted at the middle of the seed tube in order to keep them out of the dust. But most of the seed-delaying seed tube bounce happens in the lower part of the tube. So you really don’t have a good idea of seed spacing with an optical sensor.

And finally, optical sensors look at the surface of the seed – just the plane that breaks the beam. So, two seeds (a double) that move along the seed tube together will be reported as a single seed, again under reporting the actual population and accurate numbers.

WaveVision eliminates these problems and provides good clean information to your monitor. High frequency radio waves, rather than light, engulf seeds so that you get a “three-dimensional” look at seeds. It sees mass, not shape. So doubles look like doubles. The radio waves also see through dust. And that means we can mount the seed sensor where it belongs, at the bottom of the seed tube.

Learn more about us.

Parts for your Farm or Truck needs.

Learn and grow with us.

Web Design, Development, and SEO by